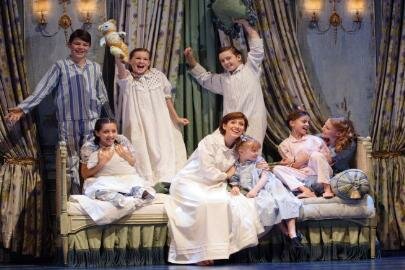 The Sound of Music

Andrew Lloyd Webber, David Ian and The Really Useful Group’s smash hit production of the legendary Rodgers and Hammerstein musical “THE SOUND OF MUSIC” will be appearing at The Bristol Hippodrome from Tuesday 2nd - Saturday 27th November 2010.

This lavish production tells the story of the Von Trapp family’s flight across the mountains with its unforgettable score that includes some of the most memorable songs ever performed on the musical stage including ‘My Favorite Things’, ‘Do-Re-Mi’, ‘Climb Ev’ry Mountain’, ‘The Lonely Goatherd’ and the title song ‘The Sound of Music’.

“THE SOUND OF MUSIC” has music by Richard Rodgers and lyrics by Oscar Hammerstein II, with a book by Howard Lindsay and Russel Crouse, suggested by “The Trapp Family Singers” by Maria Augusta Trapp.

“THE SOUND OF MUSIC” is directed by Jeremy Sams, with choreography by Arlene Phillips, design by Robert Jones, sound by Mick Potter and lighting by Mark Henderson.

This production of the legendary Rodgers and Hammerstein musical opened to rave reviews and sell-out business at the Wales Millennium Centre in July 2009 following a record-breaking 954 performances at the London Palladium. “THE SOUND OF MUSIC” originally premiered on Broadway in 1959, when it won six Tony Awards, including “Best Musical”. The show first opened in London in 1961 with a revival in 1981, both productions having record-breaking runs. The 1965 Hollywood film, which starred Julie Andrews and Christopher Plummer, won five Oscars, including “Best Picture”.